A member of Burning Rescue. She is cool, calm, and professional at all times, and does things at her own pace. She plays the straight man to Galo and Varys.

Aina is an expressive and sweet young woman with an easy-going personality. Contrary to her presentation, Aina handles her work in a professional manner. She calls out the injustices she sees and helps those in need.

She talks about Galo a lot to her sister. She cares about him as a friend and comrade, especially since he can be perceived as reckless. This has resulted in her saving him a few times.

Hair taut in a pink ponytail with short bangs and fringe, she sports a crop-top, red leggings, Daisy Dukes, and white and red sneakers. Her work suspenders are mainly black with yellow segments. On occasion, she may wear a short, red jacket displaying Burning Rescue's logo. Her eyes are a light blue.

Her build is thin. She is shown to be shorter than Galo but taller than Lucia.

During Galo's introduction to the team, Aina is shown watching Galo discuss ancient Japanese firefighters. She is the first to ask about the homemade Matoi he has. When it ends up breaking thanks to Ignis, she calls Galo an idiot.

Before the introduction can continue, the station's emergency sirens go off. Everyone heads out. During the emergency, Aina helps with carrying out survivors and Burning Rescue members. She ends up catching Galo and Thyma.

When Thyma wakes up, she suddenly becomes a Burnish, resulting in Galo being set aflame. Aina thinks fast and puts both Galo and Thyma out. She explains to Galo that most likely Thyma wasn't a Burnish before the fire and, thus, wasn't the cause for the flames. Before Burning Rescue can do anything else, Gueira and Meis intervene and take Thyma away.

Burning Rescue is sent out after a recent Mad Burnish attack. Aina, Varys, Remi, and Galo are put in charge of rescuing survivors. As they do so, Mad Burnish appears on the roof where Aina, Lucia, and Galo are.

With Galo's Matoi Tech and Burning Rescue's cooperation, they capture all three members: Gueira, Meis, and Lio. After they are taken away by Freeze Force, Aina and her fellow squad members leave.

As celebration, Burning Rescue goes to a local pizzeria. They mainly talk about Galo. However, the conversation doesn't last for long as Freeze Force makes another appearance. They are there to capture a Burnish employee, which both Aina and Galo retort to. Aina specifically states that the employee is not a terrorist and, thus, should not be taken away. Freeze Force ignores her pleas.

Once they leave, Galo drives away in anger. Presuming he's going after Freeze Force, Aina follows him to a frozen lake. Galo then reveals to her his actual intentions: to chill out. The duo proceed to skate together. Here, they briefly vent to each other about how they are projections of those they care for. In Aina's case, it's with her sister Heris.

After Aina is accidentally dropped on the ice, Galo leaves and has Aina call in a Burnish flare they saw. She then later finds a tied up Galo in a nearby cave, releasing him.

When Galo goes missing for nearly a week, Aina is shown searching for him on her own. She finds it suspicious that he would miss work for so long. She later discovers the truth: Galo was locked up by Kray. This results in a confrontation with her sister, who insists that Galo attacked Kray. Aina is left dumbstruck.

Lio's rampage in the city has Aina and her fellow crew members on the job. They then find Galo, who insists that they help him with taking down Lio. With his plan, Aina is put in charge of trapping Galo and Lio in one of her containers. She then drops the duo into the frozen lake, where they unintentionally find Deus' lab.

Having encountered Deus' AI inside her plane, Aina joins Galo and Lio inside. Here, the trio discover that an alien species is trapped inside the Earth's core and is the reason for the Burnish's existence. With the large amount of heat, the creatures Deus nicknamed "Promare" will erupt outward, destroying the world. Kray plans on using teleportation with the people of Promepolis, but this would speed up the process of Earth's destruction.

Deus then shows evidence of Kray murdering Dr. Prometh, showing Kray for the fraud he is. As Galo and Lio head out on Deus X Machina, Aina is left on her own. She takes the time to use the camera footage to stop her sister from continuing the Burnish Teleportation project. After Heris flings herself off a building, Aina catches her. She then fights off Freeze Force.

After all of the Promare is released from Earth, Aina is among the people with Galo, Lio, and Kray.

Aina is the closest member to Galo as evidenced by their interactions at the frozen lake and later cooperation. She finds Galo to be an idiot, but doesn't deny he is genuinely a good person. Heris claims that Aina enjoys talking about him to her.

During the frozen lake scene, Aina followed Galo to stop him from following Freeze Force. He reveals he actually left to calm down. Aina is willing to listen to and even vent out her feelings to Galo. As they skate together, Aina is caught by Galo and then promptly dropped when he notices a Burnish flare.

When Galo stops Lio, Aina locks the both of them in a carrier. She then drops them at the frozen lake. The trio then cooperate together to stop Kray Foresight's plans.

Heris is Aina's older sister. According to Aina herself, most people know her for her sister's work with Kray. Thus, she believes she is just a projection of her. When Aina discovers Galo was locked away, Aina immediately confronts Heris about it. While Heris does deeply care about her, she proceeds to lie about what happened with Kray.

Heris' main reason for participating in Kray's plan is to ensure Aina's safety. With Heris' participation, her younger sister would be brought along as well. However, during the transportation itself, Kray ignores Heris' pleas to wait for Aina to board and continues the plan anyway.

She is fairly close to the rest of her co-workers. Her role of collecting and deploying passengers makes her respected. Aina heavily cooperates with her colleagues to ensure rescues go in order. She is also shown hanging out with them after hours.

As a member of Burning Rescue, Aina finds Lio to be a terrorist at first. After the reveal of Deus' lab though, she begins to trust him and cooperates as an ally. She is even willing to show Heris Deus' camera footage to stop the Burnish project.

Aina in the Promare movie

Aina and Galo in Promare 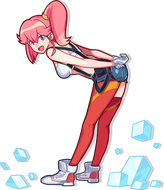 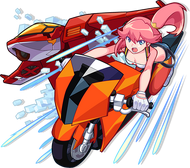 Retrieved from "https://promare.fandom.com/wiki/Aina?oldid=2181"
Community content is available under CC-BY-SA unless otherwise noted.