Start a Wiki
This article is a stub. You can help Promare Wiki by expanding it.

Kray Foresight (クレイ・フォーサイト) is a character in Promare.

The administrator of the Independent Republic of Promepolis and chief director of the Foresight Foundation. He used to research fireproof building materials, but soon developed an instant-freeze bullet that can put out a Burnish fire. Galo looks up to him as a result of being pulled from a fire by Kray when he was young.

At face value, Kray appears to be a kind individual who is willing to sacrifice and give to the people. His Japanese voice's quieter tone is an indication of this.

However, contrary to his soft-spoken and gentle persona, Kray is in actuality a very aggressive and easily angered tyrant. He desires nothing but to be seen as a savior and hero by humanity, and to this end is willing to do whatever, and sacrifice whoever he believes necessary to achieve his goals.

He towers over most people and often has a soft expression with closed eyes. His hair is slicked back and blond. Kray also has a movable prosthetic. When he begins to unravel to his true self, his eyes are wide with small, red irises and pinpoint pupils. His hair becomes unruly, standing up with waves and down in his face.

After his reveal as a Burnish, Kray's hair is set aflame with yellows and pinks. His prosthetic oozes of flames.

Kray Foresight was once an undergrad scientist researching and developing technology to counteract the Burnish threat. He worked under Dr. Deus Prometh, who he later murdered and stole his research from. During this time period, Kray himself became Burnish. While he tried to resist at first, his body ended up overflowing and burned down a nearby house. This left him without an arm. A child escaped from within. That child was Galo Thymos. Kray used the incident to frame himself as a hero to the public.

Following the event, Kray would work tirelessly in an attempt to completely extinguish the Burnish through the foundation of groups such as the Burning Rescue and the Foresight Foundation. This effort culminated in the foundation of the city of Promepolis, which Kray watches over and protects as Governor.

During the events of Galo-Hen, Kray gives Ignis and Remi Galo as a new recruit. While Galo passed all his tests, he barely had any work training. This causes the duo to hesitate on having him join. Kray continues to insist, saying that Burning Rescue can use him freely. As Kray had saved Promepolis in the past, they then agree to add him to the squad, contemplating on whether or not Galo was actually capable or an idiot.

Kray Foresight is first seen during a medal ceremony congratulating Galo Thymos, a rookie member of the Burning Rescue, for the capture of the leader of the Burnish terrorist organization Mad Burnish. As he awards Galo, he tells him to continue protecting Promepolis.

When Lio informs Galo of Kray's crimes against the Burnish, Kray is seen once again. Galo attempts to return his medal to the governor and begins to question him on the Burnish experiments. Kray decides to show Galo his plans.

Underground, Kray explains that in six months, the world will be overflown with magma. This specific disaster is said to be worse than the Great World Burn. To prevent this, Kray decided to use the flames of the Burnish to transport Promepolis from Earth. Rather than only saving one town, Galo is quick to point out that they could just remove the magma, but Kray insists that he considered it already.

At Heris' lab, a proper display is made out of a recently captured Burnish man. The experiment is a success. Everyone is made happy by the result besides Galo and the now-suffering Burnish. Galo continues to insist that this isn't the right thing to do. This results in Kray having one of his guards point a gun to Galo's back, him hitting Galo with his prosthetic, and admitting to Galo that he despises him. He then sends the younger man away to be executed later.

Kray Foresight from the movie

Kray Foresight from the trailer/movie

Kray being hugged by a child Galo 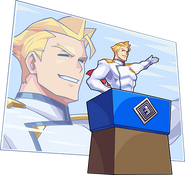 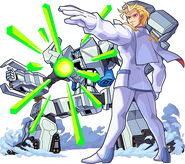 Retrieved from "https://promare.fandom.com/wiki/Kray?oldid=2194"
Community content is available under CC-BY-SA unless otherwise noted.