Meis (メイス) is a high-ranking member of Mad Burnish in Promare. He acts as a right-hand man to Lio and works alongside Gueira, knowing him well before even meeting Lio.

Meis is a tall, slender young man with long, dark blue-purple hair neatly covering his right eye and going down past his shoulders.

He wears a simple pink tank-top with long black pants with a wallet chain on them. His shoes are also black, with white tips at the ends of them.

He has a small tattoo on his left shoulder reading "風刃" (Wind Blade).

Meis is claimed to be the brains of Mad Burnish, and is calmer than his main partner in crime, Gueira. Despite this, he is shown to get just as excitable as Gueira when they are out starting fires, and can actually be a bit cockier than him, leaving a trailing loop of fire behind him on one occasion while Gueira chose to go forward normally.

Like most Burnish, he is unhappy with how he has been treated during his life. Due to this, he is a member of Mad Burnish.

He is at least somewhat self-sacrificing, and, alongside Gueira, puts himself in extreme danger for Lio when the situation calls for it.

Meis, along with Gueira, acted as leaders for Mad Burnish, starting fires and taking away Burnish to where they would all hide in a sort of safe haven for them. When they were attacked one day, Lio came in to save them, earning Meis' respect. Hearing Lio out, he agreed never to harm another non-Burnish again, as that would make them just as low as those attacking them, and give nobody any reason to trust them or start treating them like normal people.

Much like Gueira, he acts under Lio's orders from that day on, only ignoring them to protect Lio from harm as he is regarded as their only hope to make things right.

Meis is shown to have a deep amount of respect for Lio, going so far as to risk his own life to save Lio, as well as trusting him enough to let himself get caught and imprisoned when Lio made up a scheme to break the prisoner Burnish out of jail.

He seems overall impressed by Lio's leadership and decisiveness to not harm anyone.

Gueira is a close comrade of Meis and they have known each other for a long amount of time prior to Promare taking place. They are very close, previously acting as the leaders of Mad Burnish together and wearing similarly styled outfits, as well as having matching tattoos. Meis wears a red shirt, which matches Gueira's Burnish armor, and vice versa.

They are generally seen nearby each other, and even tend to do coordinated showy motorcycle moves as a pair. 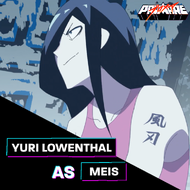 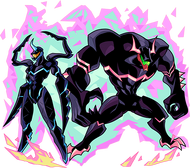 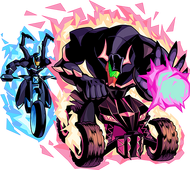 Gueira and Meis' other appearance in Monster Strike
Add a photo to this gallery
Retrieved from "https://promare.fandom.com/wiki/Meis?oldid=1930"
Community content is available under CC-BY-SA unless otherwise noted.