GKIDS released Promare in select theaters on September 17th (English dubbed) and September 19th (subbed) as a special event, with a limited release on Sept. 20. The official website for the movie is promare-movie.com.

The Burnish are a group of humans with the ability to create bend fire to their will. Burnish first appeared 30 years ago, when an alternate dimension meshed with the one earth resides in. Sentient beings from the alternate dimension called Promare became trapped on Earth. The Promare has a desire to burn as that is how they thrive. They latch onto humans for hosts, and obey their host's will, creating those known as Burnish.

Due to the heightened Promare activity, much of it living in the magma beneath the surface, the world is going to be consumed in lava in the foreseeable future. Only a select few know about their impending doom and prepare ways to prevent total annihilation. Their methods are dubious.

Burnish are loathed by society, mostly out of fear and negligence that Burnish are also human. The Mad Burnish, who are claimed as terrorists, only wish to leave a message to those in power. Lio shows Galo who the real enemy is.

Galo, once believing in the same things as society, his morals of protecting everyone remains unshaken. He shows Lio a better way to fight. They forge an unlikely bond with similar goals. Galo's will combined with Lio's creates a new flame that is used to save the world.

The movie was released in Japan on Blu-Ray and DVD on February 5, 2020[1]. On April 21st, both the English and Japanese dub were released digitally for western audiences. Blu-ray was then released on May 19th[2].

The official original soundtrack for the film was released on May 24th, 2019[3]. Furthermore, the band Superfly's album Ambitious featuring original songs for Promare were made accessible on June 12, 2019[4].

On the review site Rotten Tomatoes, the movie currently sits at a positive 97% with an audience score of 93%. For the Critics Consensus, Promare was stated to be "visually dazzling and narratively exhilarating[5]." Metacritic on the other hand weighs it at an average of 77 based on critics. User reviews on the site were fairly positive with issue coming from limited characterizations[6]. IMDb places the movie at a 7.1 with MyAnimeList at 8.1, the latter's user reviews making comparison to previous works such as Kill la Kill and Gurren Lagann[7][8]. All agreed the target audience to be that of teens and young adults due to its PG-13 rating.

Jaylon Martin from the site Anime News Network on the movie's discrimination message found it to be hypocritical, especially in regards to the ending. He also felt fans only portrayed the movie as a "cute, fun, ride" online despite the multiple instances of violence towards the Burnish in the film[9]. A similar sentiment was shared with Reuben Baron on CBR, who claimed that Kazuka Nakushima's recent writings' twists of having a main villain be a part of a minority group would be considered a "potentially problematic trope[10]."

Animation-wise, it has been noted that the film bears similar visuals to the 2018 film Spider-Man: Into the Spiderverse by IMDb's trivia section and user reviews[7]. This may of been intentional as Imaishi made comparisons himself[11]. With that said, Matt Schley of The Japan News found the transition from 2D to 3D jarring in rare instances, but heavily enjoyed the cell-shaded appearance of the characters. This was something he noted to be common with anime as well[12]. 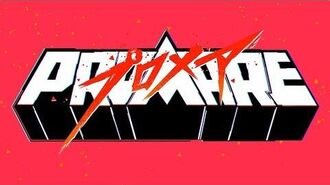 Kray and Biar
Add a photo to this gallery

Retrieved from "https://promare.fandom.com/wiki/Promare_(movie)?oldid=6963"
Community content is available under CC-BY-SA unless otherwise noted.