Start a Wiki
This article is a stub. You can help Promare Wiki by expanding it.

Vulcan is the Colonel of Freeze Force, a police and military organization responsible for war against Burnish crimes and attacks. A hardened, mildly hysterical man whose more than a little enthusiastic about his position and his mission.

Brutish, haughty and abrasive. Cruel, conceited and over-compensates. He abuses his power over others and bullies them. He doesn't view Burnish as people, rather as fuel. He enjoys inflicting misery on others and brutalizing Burnish publicly. He is loyal to Kray, but most likely due to something in return for himself.

He has a big head and wild, orange eyes. His body is framed in massive animatronic parts to hide that he is actually minuscule. He is bald.

Vulcan's armor consists of greys with segments of green and white. Notable aspects of it include his orange visor, a green shoulder pad, and striped plating on his right arm.

Vulcan and Freeze Force make their first appearance after Burning Rescue's takedown of Mad Burnish's leader. They've arrived due to a call about a recent attack. Finding that Galo and his co-workers had already dealt with it, Vulcan begins to threaten throwing Galo in jail for interfering with police matters. Ignis then steps in, stating that Burning Rescue is under authorization to deal with Mad Burnish attacks. This results in Vulcan leaving with a captured Lio, Gueira, and Meis in tow. 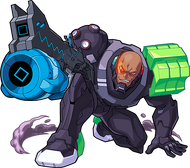 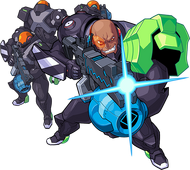 Retrieved from "https://promare.fandom.com/wiki/Vulcan?oldid=2110"
Community content is available under CC-BY-SA unless otherwise noted.